The idea for Creopia Productions was born out of a love for the Armenian city of Vanadzor. This is the city Sashka Avanyan is from. It’s Armenia’s third biggest city, but in a lot of ways it’s completely overlooked. When looking at Armenia’s political context – a revolution two years prior that led to a change in government, its ongoing war with Azerbaijan, and the long-term consequences of the breakup of the Soviet Union – Sashka feels there is a mountain to climb, but that also means there is a lot of potential to start something completely new.

Sashka is a filmmaker and she has paired up with her co-founder Lusine, whose experience is from working in NGOs focusing on peace building and conflict resolution, to set up what she believes is the first social business in Vanadzor. Creopia Productions has two sides to its work: it provides video editing and animation services to clients mostly from the English-speaking world, and it offers creative skills training and community events to people living in Vanadzor. Unfortunately, the latter, social side of its work has had to be paused for the time of COVID, but that has by no means dampened Sashka’s enthusiasm. She talks about reversing the brain drain and making Vanadzor an attractive place for young people to live and work. They’re big plans, but she is realistic that they are in it for the long haul, and it will take a few years before there is any noticeable change.

A big part of the motivation behind Creopia is the love for the city, and a vision to make it a viable place for young people to live and develop their creative skills. Sashka talks about the focus on technology and IT in the Armenian economy, which makes sense considering its geopolitical situation – landlocked with three borders closed – and says that, so far, the creative industries have not been considered to be important on the government level, despite their huge economic potential. The Creopia team find themselves in a lot of these contexts that are attracting investment in the country, being a ‘tech-adjacent’ business, but are fighting an uphill battle with the mentality that “there is no money in the arts”. 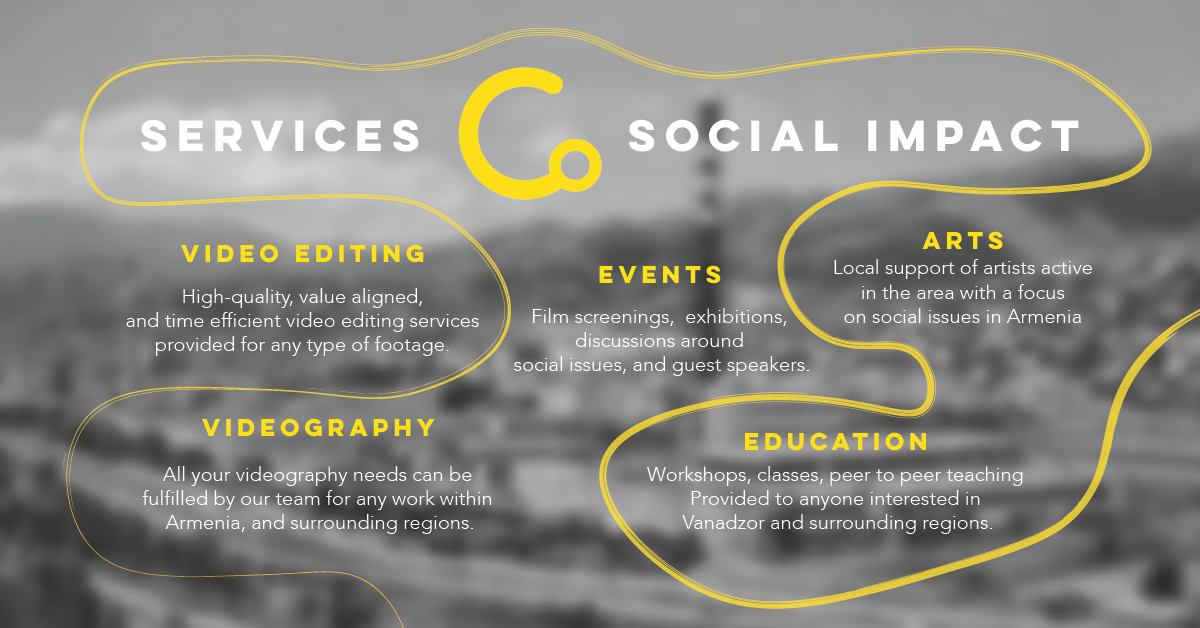 Luckily, the profitable side of Creopia’s business was all online even before the pandemic, so they have not been hit as bad as most. This has allowed Sashka to keep developing plans for the future without this additional stress, as well as to examine the causes of the problems. She talks a lot about the generational divide in Armenia: the TikTok generation vs. those who long for the glory days of the USSR. For her, this is in large part the cause of the gaps in the education system, which she is trying to address in the future plans for her business. Creopia already works with many institutions on educational videos, and this is something that Sashka finds to be extremely important. “It’s about planting seeds” she says, and “creating space for people to articulate something that they might not be able to do at school”. She is convinced that many people simply don’t know their talent or value, and she wants Creopia to be at the forefront of encouraging young people in Vanadzor to reach for the stars.

Having said all of this, and despite her positivity, Sashka says it is hard to be the only business doing this. She often feels isolated and that she is fighting a lost battle. This is why, for her, the Yunus & Youth Fellowship came at exactly the right time. Not being able to host the community events or the creative skills trainings due to COVID, it has meant everything to her to be part of a community where other young people, like her, are trying to bring about positive change in the places where they live. Being encouraged by her mentors and the other fellows, and feeling like she is not alone, is the motivation she needs to carry on, to keep her faith going despite the low period.