Diana Orembe is a 23-year old woman from Tanzania. She is the Managing Director at Divine Recyclers.

Since Diana graduated in microbiology in July 2018, she decided to contribute to solving problems related to malnutrition, poverty, and hunger. On her decision, she said: “I don’t want a job, I will work in this idea, I want it to work”.

Diana’s passion to do something for her community came from realizing how the problem impacted people around her. Her main challenge, therefore, is to reduce malnutrition among children aged 0-4. To contribute to achieving such a goal, Diana saw the potential of turning waste into nutritious products, especially turning eggshells into nutritious supplements. 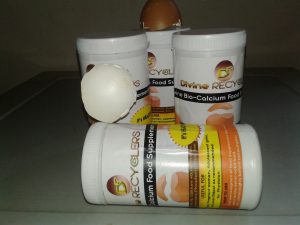 Growing up in a village where a lot of people had malnutrition, she has observed that “people have food, but it’s not good, they can’t afford to develop a healthy diet to produce something to compensate what was missing”.

In her social entrepreneurship journey, Diana has faced many challenges. Mainly, she states that it is difficult to gain the community’s acceptance, as it is hard to convince them that eggshells can be good for them. In turn, it is difficult to get funds for her social business. To tackle this challenge, Diana has applied to many funding opportunities and submitted her business model to many possibly supporting organizations, getting both rejections and acceptances. Funding for it only came in February 2019.

Along with financial support, Diana has also found team members who are paid to develop Divine Recyclers along with her. Mentors were also very important to help Diana and her team produce animal feed and establish the company.

As the CEO of a social business, she agrees that helping people is what brings her the most joy. As a female business owner, she also feels empowered by being the company boss. She challenges a culture that does not believe a woman can be an entrepreneur. Diana is proud of herself for digging deep into her business and learning skills such as marketing, sales, and accounting.

The downside of her work, so far, has been to deal with people who do not understand the importance of her work. However, she has learned that part of a social entrepreneur’s job is to communicate an idea passionately and to understand different people and customers. Passion, therefore, is what keeps her motivated.

Divine Recyclers’ next steps are to expand to other products for animals and reduce their operation costs, in order to respond to the growing demands of a growing population. The social business is also hoping to gain a human consumption certification and impact at least 10 percent of the local population of children aged 0-4, lactating mothers and expectant mothers by 2025.